A Fond Farewell to Pocket Panto and ON Tour Autumn 2018 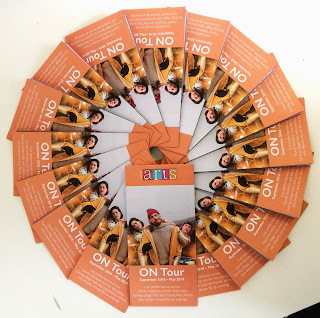 Yesterday saw the very last of our Pocket Panto Dick Whittington shows as part of Rural Arts ON Tour.  We had over 25 pantomimes touring as part of our rural touring scheme and the company themselves delivered over 50 performances across the region!

The lovely performers kept us up to date with everything that went on during their tour of North Yorkshire with below being just a few of our favourite moments of theirs!

We got some great feedback from our audiences with comments such as “Hilarious and an excellent piece of entertainment. Worth every penny!” (Croft-On-Tees audience member) and “A really good bash, very enjoyable” (Terrington Village Hall  audience member)

It wasn’t only the last Panto show on Sunday but also our last show for the Autumn season of ON Tour. For this reason we thought we’d tell you our personal highlights of ON Tour for Autumn, aside from December and January’s Panto of course!

The beautiful hall set up ready for the #100differentwordsforlove show tonight at @terringtoninfo We can’t wait to see @Jdsrowland perform! pic.twitter.com/PPZUEHZF3j

After having seen James perform for ON Tour the previous year, and at Edinburgh Fringe in August, we were pleased to get the chance to go along to see James perform again, as well as to have the opportunity to see our new promoter for Terrington Village Hall; Dave Gaskell, put on his first ON Tour show at the hall. Overall the night was thoroughly enjoyable and it has been great to see how well received the ON Tour shows have been at Terrington Village Hall so far!

In October we were lucky enough to go along to Lost Dog’s performance of Romeo and Juliet at Newton-Le-Willows Village Hall, which went on to perform at well known venues such as the Riley Theatre in Leeds. It was great to get the opportunity to see a popular contemporary dance show in such an intimate setting!

We were also big fans of Odd Doll’s “Seaside Terror”, which we had got the opportunity to see the previous year at a showcase at The Arc in Stockton. It was particularly great to get the chance to interview them on our blog, before they toured the show to Skipton Town Hall and Stillington Village Hall, as it gave us the chance to get to know a bit more about Seaside Terror before it’s tour with us!

November saw us working with lots of amazing young people as part of our CREATE Tour scheme and our recently established Young Promoter’s scheme, which proved for a few very busy weeks at Rural Arts!

On 1st November we had the Three Little Pigtails show at The Courthouse, which had also toured to Skipton Town Hall the previous day. We worked with our young promoters and Iklooshar at Garlic Theatre, to set up the show and get it prepared for our audiences.

November also saw our tour with Fuel Theatre’s show Summit and CREATE Tour in Tees Valley. We had such a great time working with the young people from Tuned In! in Redcar and it was amazing to see what a positive impact the project had had on each and every one of them!

Overall it’s been yet another great season for ON Tour and we’re very much looking forward to Spring 2019!

Take a look at our ON Tour brochure and Courthouse brochure to see what Spring has in store including music from the likes of Stevie Williams and Sam Dunn Organ Trio, family theatre from Uchenna Dance and Half a String, drama from James McDermott and dance from Joan Clevillé and Lila Dance.

If you would like the chance to have professional shows brought to your local community venue then see how you can become an ON Tour promoter through our website.