? Touring to Ryedale this March! ?
This March, award winning dance company RJC Dance and students from Norton College will be touring to venues across Ryedale as part of our CREATE Tour project.
RJC Dance will be performing their show “Still Blazin'” which has performed previously at Tuned In! in Redcar and Thirsk Town Hall. Last year’s audience were amazed by the show and we’re sure this year will be just the same, with a performance that is guaranteed to make you want to get out of your seat and join in dancing!

“Still Blazin'” will be Touring to: 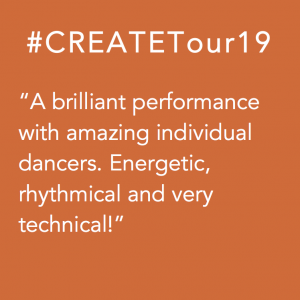 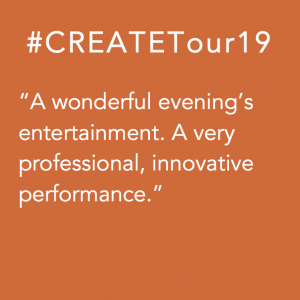 Friday 8th March
The Milton Rooms
(Tickets)
01653 696240
This half term, RJC’s facilitator, Tricia, will be going along to Norton College to deliver a workshop over 4 days, working alongside the students to create a carnival style dance piece which they will be touring alongside RJC Dance’s show. Tricia is a professional dancer who specialises in SOCA amongst others.
SOCA is a style of music that originated in Trinidad and is a popular style of music to dance to in carnival. Take a look below to see RJC Dance performing SOCA at the Columbia Threadneedle World Triathlon Leeds 2016. We can’t wait to see the young people of Norton College have a go at this energetic dance performance!
Not only will the students of Norton College be getting the chance to work with RJC Dance, but there will also be two free workshops running at two of our other venues for people aged between 11 – 18 years, suitable for all levels of dance experience. With shows such as Greatest Dancer and Strictly Come Dancing becoming increasingly popular, this is your chance to try out a unique dance style at no charge!
The first workshop will be held at Helmsley Arts Centre on Tuesday 26th February at 4.30pm and the second workshop will be at The Milton Rooms on Tuesday 5th March at 4.30pm. The Milton Rooms will also be offering a ticket discount to anyone that attends the workshop; Adult Tickets for £7.50 and U18 Tickets for £3.50. If you or someone you know would like to get involved please book a place by ringing the box office numbers as listed above, as both workshops are booking up fast!
We’re also having a taster workshop being held at Norton College in the next couple of weeks, which means it won’t be long now until we have our final create tour group signed up for the tour!
Keep an eye out on Instagram to meet them all as they show us their moves as part of our #showusyourmoves campaign, in the lead up to the show.
You can get involved as well and show us your dance skills with the hashtag #showusyourmoves. Tag us @create_tour (Instagram) or @RuralArts (twitter) and you might see yourself appearing on our Facebook, Instagram or Twitter very soon!
Make sure you get your tickets whilst you can and don’t forget to check at the box office what offers each venue have on tickets with 20% discounts on group tickets at Wintringham and a “Bring a friend for half price” offer on Adult tickets at The Milton Rooms.
We will see you there!