Welcome back to A Rural Review – the weekly blog series which gives a recap of all that has been going on at Rural Arts and also what is coming up in the near future. Now you might not have heard it mentioned, as people have kept pretty quiet about the whole thing, but it is actually only a week till Christmas! (I know I couldn’t believe it either – you would think it would have been advertised more really wouldn’t you…) At the end of last weeks blog we promised something slightly different than the norm to tie in with the festivities… and as we have already mentioned we do love a poem at Rural Arts…can you see where this is going? But wait! Before we start we want to point you in the direction of Thirsk Writers Group – which was spoken about way back in our blog in 2011. As of December 2015 this group is not only still going, but flourishing. If you want to attend, meetings are now held at The Golden Fleece Hotel, Market Place, Thirsk, in the Rydale Room, every second Tuesday. There is even chance to go before Christmas – with the last meeting of 2015 on the 22nd December and the first meeting of 2016 on the 5th January. This is for adults only but all newcomers are welcome.

Now its time to buckle up, strap yourself in and prepare for a slightly different take on ‘Twas the night before Christmas – Rural Arts style.

‘Twas the week before Christmas…
Twas the week before Christmas, and all through the Courthouse
the staff were still working, with keyboard and mouse.
But the cafe had been decorated with love and with care,
In hopes that St Nicholas soon would be there.
There were children running around, all hungry for grub
proudly showing their new creations made at our art club.
And after they ate, sat and laughed , and were sent on their way,
The Rural Arts team thought they may close for the day.
When out on in the car park there arose such a clatter,
They flew to the windows to see what was the matter .
Cafe, gallery, and office staff were there in a flash,
(but slower in the workshop so no porcelain xmas decorations were smashed)
The security light on the breast of the non existent snow
Gave the lustre of mid-day to objects below.
When, what to their wondering eyes should appear,
But a miniature red sleigh, and eight tinny reindeer.
With a little old driver, so lively and quick,
They knew in a moment it must be St Nick.
With 8 reindeers who have so much individual fame,
It seemed almost arbitrary when he called them by name!
“Now Dasher! now, Dancer! now, Prancer and Vixen!
On, Comet! On, Cupid on Donner and Blitzen!
Please listen for heavens sake, I’ve asked you to stop!
As if I’m not mistaken, this is our spot!”
All at Rural Arts couldn’t believe what they saw,
When he hopped from his sleigh and sprinted to the door.
They heard a knock, then another, and were even more surprised,
When St Nick rushed in, a tear in his eye.
“I’ve missed everything haven’t I?!” St Nicholas exclaimed
His great booming voice filled with sadness and pain.
“This was the thing that I most feared
I didn’t attend one of your activities this year!”
“I’ve been so busy planning for this years advent,
I missed every single one of your amazing events”
I know they’ve been amazing, I know that that’s true
Because every week I sit and read your ‘Rural Review!’ (Is this a little arrogant? Meh..)

“I thought if we were quick, I could get here to catch
National Theatres Hamlet starring lovely Cumberbatch
But now I’ve missed it, thats it, I’ve nothing to live for,
Christmas is cancelled, I can be Santa no more!”

Now the Rural Arts staff sprang to their feet,
And told St Nick all about their next week
They were open till Christmas eve, the work never stopped
With the everything open and even workshops!
They told him about Sunday, when he could see Pocket Panto,
Or  in the cafe Monday and Tuesday he could make meringue men of snow
And when he turned to view the items on our gallery shelf,
I saw him laugh, in spite of himself!
But what really turned the tables, made Santa’s eyes gleam,
is when they said whats in store for 2016
More workshops, more open days and loads more shows
And told Santa he would be welcome at any of those!
Now his eyes-how they twinkled! his dimples how merry!
His cheeks were like roses, his nose like a cherry!
And with a smile he was out, saying his goodbyes,
As he readied his team for their flight in the sky.
He sprang to his sleigh, to his team gave a whistle,
And away they all flew like the down of a thistle.
But I heard him exclaim, ‘as he disappeared into fog

“Happy Christmas to all, and to all a good blog!” 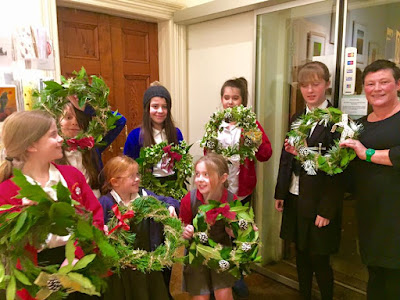 We want to say a huge thank you for anyone who has attended any of Rural Arts many activities over 2015 – it has been a truly wonderful year and it has been an upmost pleasure to spend it with you all. We at Rural Review will be taking a week off between Christmas and New Year (I hope Santa can cope…) but will be back in January 2016 to continue making bad puns and spending too much time sat on rhymezone.com. Thank you so much for reading and we hope you have a wonderful Christmas and fantastic New Year. See you soon.